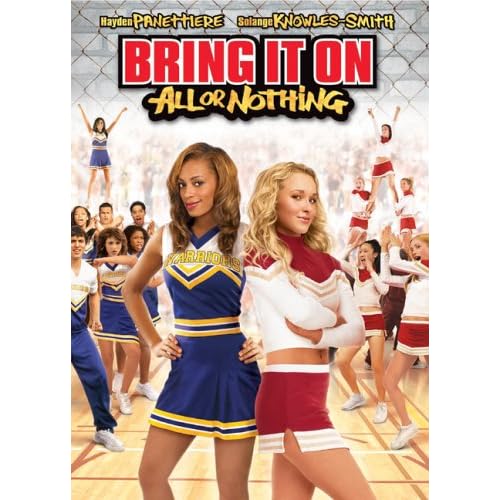 My wife was watching E! last night and at 8pm up comes the showing of the film Bring It On: All Or Nothing. The third film in this franchise (I've not seen any of the others) is about a rich California girl who has to change schools when her dad loses his job. She goes from the school where she is head cheerleader to one where she barely fits in. But cheering is in her blood and that helps her cope with new friends, a new love interest and a chance to get back at her bitchy rival.

It stars Hayden Panettiere of Heroes and came out just prior that show hitting the airwaves. We all know how Hayden looks in a cheerleading uniform. It also stars Solange Knowles. Intesting little fact: it also stars Marcy Rylan who took over for Hayden on the soap opera the Guiding Light in the role of Lizzie Spaulding. So, basically you have two actresses who played the same soap character playing rivals. Go figure.

It was a nice, distracting film. Not a lot of meet. Typical girl in new school, girl is unhappy, girl finds a way to fit in, girl gets revenge on her old friends who shunned her by kicking their butts in the big cheerleading competition in the end. Very formula film. But the soundtrack totally rocked. With music by Gwen Stefani and Rhianna, it really helped make the film feel very today.

Worth a watching when you've got nothing else on the tube.
Posted by Martin Maenza at 5:47 AM

Email ThisBlogThis!Share to TwitterShare to FacebookShare to Pinterest
Labels: Bring It On: All Or Nothing, cheerleading, films