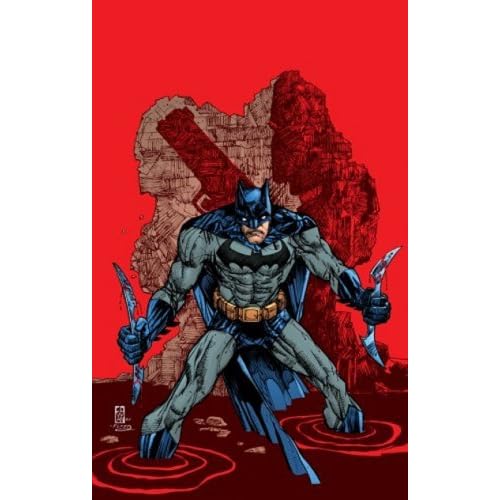 I checked out the hardcover Batman: Lovers and Madmen from the library yesterday. This book reprints issues 7 through 12 of Batman Confidential, published in 2007 and 2008. I have to say I wasn't very impressed overall.

The story takes place in week forty-two of Batman's first year as a hero, so we're talking about a Batman who is still honing his craft and making mistakes. Okay, I know this is a popular period for writers to explore for the hero as they can show him as infallable. I get the lure. But we've been here, done that - with Frank Miller's exceptional Batman: Year One. Strike one.

Next, we're introduced to a love interest we've never heard of before. Okay, that'll work - new territory is good. But we also get some rather adult full-page spread (thus the "lovers" in the title). And what happens to her? You can probably guess - she ends up getting in the way of Batman doing his job effectively. Cliche. Strike two.

Finally, the six part story basically serves as a retelling of the origin of the Joker. Um, hello? Hasn't the Joker's origin been reinterpretted dozens of times before? Did we need another one? I don't think so. This writer doesn't add a lot to it really. My thinking is someone said "hey, we got a Batman movie coming out in 2008 with the Joker, who can do us a tale that is sort of like the film but not really?". I mean, seriously, that had to be the rationale, right? Otherwise, what editor would allow someone to tread the same ground that has been tread by many others before. It bores the readers. Strike three.