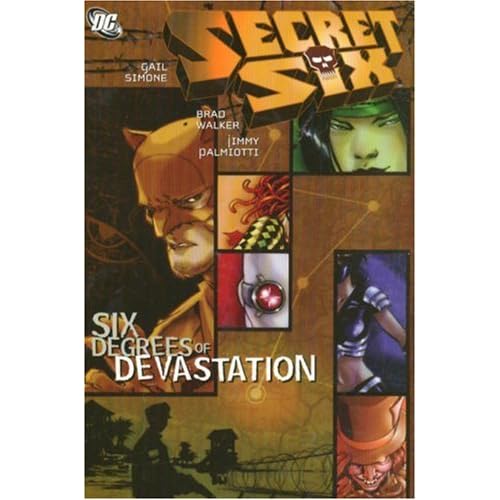 In late 2006/early 2007, Gail Simone with the help of artists Brad Walker and Jimmy Palmiotti continued her take on DC's rag-tag team of super-villains - the Secret Six - in an all-new mini series. This collection puts those six issues into a single trade paperback, and is a perfect prelulde to the new Secret Six ongoing series that just started last month.

Following up from Villains United, the regulars (Catman, Deadshot, Ragdoll, Savage and Knockout) are down one member. Who do they get to join them? Would you believe the Mad Hatter? In Gail's capable hands, she turns this goofy Batman foe into someone formidable and dangerous. Of course, the book is about villains, so there is some really twisted and violent scenes in this book. Her writing makes it work.

Being a fan of villains myself (heck, I wrote a "Secret Society of Super-Villains" fanfiction series for three years on the 5 Earths Project group), I really enjoy her spin on this cast. Having got the first issue of the ongoing title last week (which I enjoyed as well), I can see she's got some more wild ideas in mind. Hopefully she'll stay with this title for a good long run.
Posted by Martin Maenza at 1:52 AM

Mad Hatter has, occasionally, been well-written before. Heck, Batman: The Animated Series really made him formidable, if still goofy-looking.

And Bane? Bane is now a member of the Six? Holy cow, she's hitting this one out of the park.