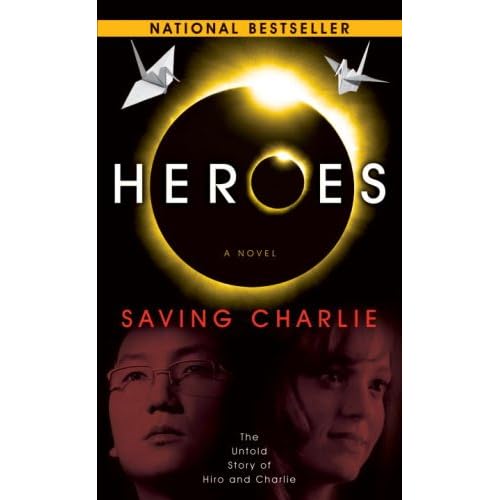 A couple weekends back, when we were up in the mountains, we stopped into the local Wal-Mart for a few things we needed. I saw the paperback of Heroes: Saving Charlie, a book that came out in hardcover back in 2007 and recently hit paperback printing. Back when it first came out, I knew I wouldn't spend the money for the hardcover - even though during season 1 I was a huge Heroes fan. So, I waited until recently to pick it up.

For those who don't know, this book basically attempts to fill in the gaps from one of the season 1 storylines - where time/space teleporting Hiro Nakamura falls in love with Texas waitress Charlie Andrews and tries to save her from a grisley death when Sylar goes after her for her power. Season 1 touched upon the details briefly but this book was written to expand upon it.

Well, it spends 279 pages attempting to do that, but the effort comes off as some pretty weak fan-fiction. Having written fan-fiction online for three years (for DC Comics characters), I have a sense for fan-fiction, both good and bad. This novel definitely falls into that later category.

The book is very uncomfortable to read at times. Do I really when to hear about Hiro's urges or attempts to hide his "obvious" interests? No, I don't. The book nearly bordered on ruining a great character for me. As for Charlie, it didn't do her any justice either. Worst of all, the book doesn't keep things consistent with what the television show did show (especially with the ending and such). In short, it violates one rule of fan-fiction that I always adhered to - do not violate established continuity just to tell your story.

If you haven't read the book and are a fan of the show, I strongly recommend you pass on this book.
Posted by Martin Maenza at 7:06 PM