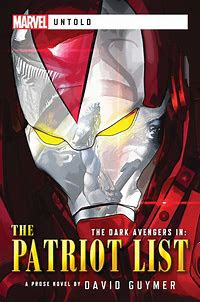 Under Norman Osborn’s jurisdiction, the Avengers have been secretly re-formed with a cabal of deadly super villains. This is Osborn’s chance to finally put the Green Goblin behind him and become the Iron Patriot the world needs him to be. But villains aren’t easy to wrangle into the place of heroes – doing damage control for his new line-up constantly puts his empire at risk. When S.H.I.E.L.D. loyalists break into Avengers Tower and steal the secret list of replacements for his team of maniacs, the threat to his reign becomes intolerable. Osborn unleashes the worst of the worst to crush those responsible… It’s hard to be a hero!

Dark Avengers: The Patriot List is another novel set in Marvel Untold line, to be published in October of 2021. I was graciously allowed an early preview galley from the publisher in exchange for an honest review.

I am a huge fan of super-hero fiction and a long-time follower of the Marvel Universe. More so, though, I love good villain stories. Something about tales that put these complex characters into interesting situations truly fascinates me, and author David Guymer delivers on all those counts. The story is fast-paced, full of action and mayhem as well as characters struggling with their own inner demons. Some handle it better than others! Guymer is also very well-versed in Marvel history, drawing from many aspects to tell his story which can easily fit within published issues of the comic book lines. That makes this "untold tale" work so well.

This one is recommended for Marvel fans and action/adventure fans.

Posted by Martin Maenza at 5:40 PM