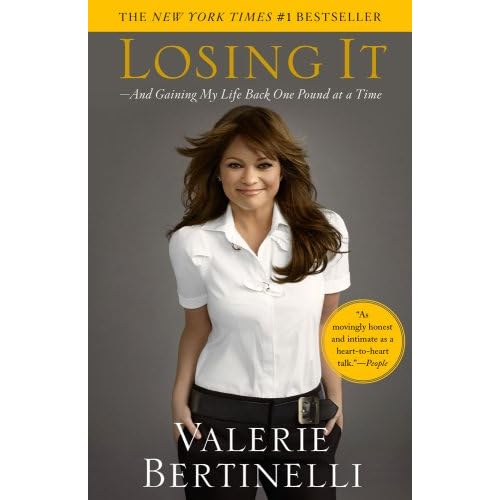 Confession time: I had a huge crush on Valerie Bertinelli from the first time I saw her on TV on One Day At a Time in the mid-70's all through my junior high and high school years. I'm sure I wasn't the only teenaged male who did. There was something about that wholesome, girl-next-door look and how well she portrayed Barbara Cooper that just entranced me. Maybe it was because she reminded me in a lot of ways someone else I was crushing on at the time. Hard to say. Still, I've always considered her very tops of my list of celebrity crushes.

Anyway, last week I realized she had written an autobiography entitled Losing It - and Gaining My Life Back One Pound at a Time. I checked the non-fiction section of my local library and it was checked in. Not for long. I checked it out and eagerly read through it in a couple nights.

I found the book to be very easy going and honest, just as I would expect Valerie to be. She doesn't lay blame on anyone but herself for most of the problems she has encountered in life. She speaks straight from the heart and gives an honest portrayal of things she went through, why and what those choices led to. I found it a very enlightening read.

Does this book shake my image of her? Well, a couple things might have - but not enough. She still seems like someone I would love to get to know, just to sit down and talk to. She seems more like an everyday person who just happened to be famous rather than some kind of diva or huge "star".
Posted by Martin Maenza at 2:54 PM